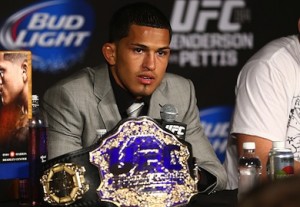 A PCL injury that required surgical repair has put him on the shelf and recently out of his scheduled December bout with Josh Thomson.  The champ now believes that he’s on the mend and hopes for a return on July 5.

The UFC always delivers a stellar 4th of July weekend card in Las Vegas, and the return of Pettis would definitely be a welcome addition to that fight night.

“I spoke to Pettis yesterday and he said his knee rehab is going great and he expects a July return. His manager is targeting the July 5th fight in Las Vegas. And by the way, Anthony is picking Benson Henderson to win this weekend.”