Home » UFC NEWS » Holly Holm is not shy on the idea of fighting Cybo... 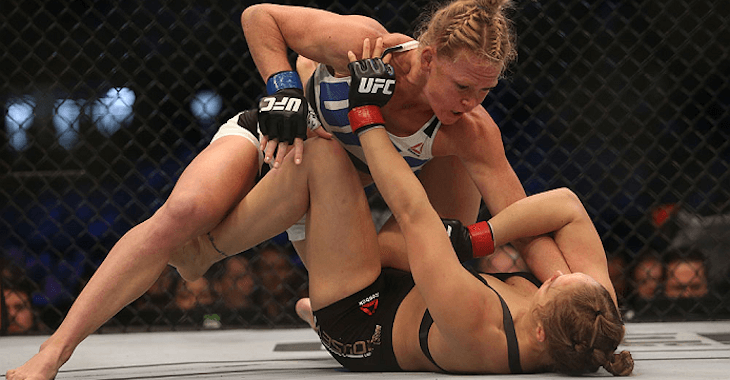 Fans had juggled the idea of what would happen in a fight between former UFC women’s bantamweight champion Ronda Rousey and Invicta champion Cris Cyborg for quite some time. The big issue for the dream match to happen was the difference in weight classes. Cyborg who fights at the 145-pound featherweight class would have to drop down to Rousey’s 135-pound bantamweight division, and the fight never came to fruition.

Current UFC women’s bantamweight champion Holly Holm is open to fighting at a higher weight class and meeting Cyborg for a fight fans would love to see. Holm spoke with the media ahead of UFC 194 on the potential champion versus champion match (transcribed by MMA Fighting):

“I know with the UFC, they don’t have that division,” Holm said. “So, if that was something that they were going to put together, I’m not against it. I’m open to it.”

“I’m not against options for other fights,” Holm said. “I don’t know how high I would go. I have fought at heavier weights in boxing. It kind of changes things with MMA, because there’s wrestling. Boxing, I think, is a little different, because you’re not dealing with somebody’s strength and weight on you as far as wrestling and grappling. But I do feel like I’m a bigger 135er. I don’t know. I guess I would just have to see if whatever would unfold if that was an option.”