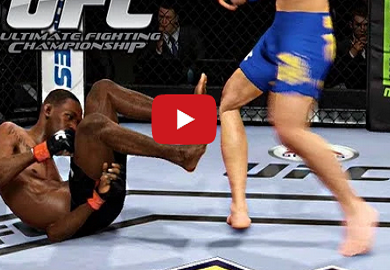 EA Sports UFC is the most realistic fighting game to date, but that doesn’t mean it comes without some flaws, and in this case, some pretty major ones. Check out these hilarious but major bugs in the game from the back-to-back mount to Yves Lavigne’s super powers.

Please note several of these videos are from the EA Sports UFC demo and may not appear in the actual game.

Below we can see Miesha Tate performing some ground and pound on an invisible opponent before Ronda Rousey manages to get her in the never before seen back-to-back mount.

When a fighter gets knocked out cold usually the muscles in their body tense up, leaving the fighter stone cold frozen. However here we can see Jon Jones landing on his right arm before absorbing it into his body.

Here we have one of my personal favorites, Alexander Gustafsson appears to be mimicking a fish out of the water, but it gets even crazier when Gustafsson begins flying through the air in an acrobatic display that leaves us wondering if Gustafsson has super powers we don’t know about.

In this next video we see Jon Jones has invented a new Jiu-Jitsu move we like to refer to as the arm-in-butt guard.

Up next is another Jiu-Jitsu move that Jon Jones unveiled in the new game, we’re not sure what to call it, but it leaves the champ unable to get up or control his legs.

And last but certainly not least is by far my personal favorite. Jones is landing some nasty ground and pound on Gustafsson, when the two stand up referee Yves Lavigne uses telekinesis powers to render Gustafsson unconscious.

Do you have funny EA Sports UFC glitches PENNation? Tell us about them in the comments section.