Hendricks Knew He Only Had Five-Minutes To Win The Title 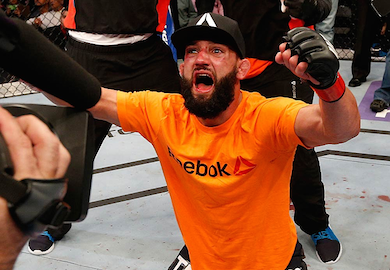 “I looked at [my corner] and I said, it’s two to two. I’ve gotta win this round. I’m not dumb. I’m not going to be one of those naïve fighters who goes ‘four to zero’. I’m true to myself. I knew I had to go out there and win that fifth round. My coaches, they told me what I needed to hear, put it that way. And I took it to heart. Leave everything out there. Five minutes can change the world.”

“I damn near died again (waiting for the decision). I was sitting there like, man, not another GSP.

“Take nothing away from Robbie, he fought hard too. We were out there and I was looking like, man, please call my name. Please call my name. They did, and it hasn’t really sunk in yet, if that makes sense. I know this thing (the UFC belt) is sitting in front of me, but that’s the way it’s always been for me. It’ll take me a couple weeks before I look back and say, oh my God, I’m the UFC champ. I’ll take it to heart and hopefully continue.”