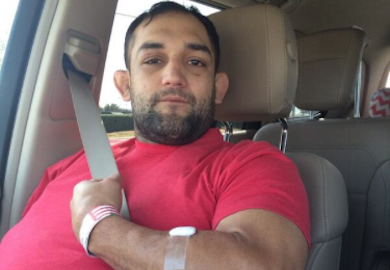 UFC Welterweight champion Johny Hendricks underwent surgery for a torn bicep shortly after winning the vacant title against Robbie Lawler. Hendricks spoke to USA Today Sports about how it feels being sidelined while fighters in his division tear it up.

“It sucks being on the sidelines, knowing these guys are all fighting to get to me, and I can’t do anything about it,” Hendricks tells USA TODAY Sports. “I can’t train for it, can’t get ready for it. The only thing I can do is sit here and wait for them to battle it out. I don’t like that.”

After UFC 174, Rory MacDonald made his argument for why he deserves a title shot, Hendricks spoke about the title picture and MacDonald saying:

“He’s one of those fighters that he can do that to people,” Hendricks says. “I’m not going to talk trash on anybody, but he makes guys feel awkward, But when someone is doing that, hey, you’ve got to know that sometimes you have to eat a punch to deliver a punch. Sometimes you’ve got to say to yourself, ‘I am paid to be an entertainer.’ In my fights it’s not if I get hit; it’s when I get hit.”

UFC President Dana White had announced prior to MacDonald’s win over Woodley that the winner of next month’s Brown vs. Lawler matchup would get a shot at Hendricks.

“If Matt Brown wins, that’s awesome because it’d be nice to train for someone new,” Hendricks says. “But if Robbie Lawler wins, I’ve trained for him before and I can do it again and make some corrections. I could also go into it injury-free this time. That’d be nice.”

This article appeared first on BJPENN.COM
Previous articleMiesha Tate: ‘I would straight up kill Caraway if he hit women’
Next articleEdgar Motivated Ahead Of Penn Rematch: No Way I Want To Lose
© Newspaper WordPress Theme by TagDiv