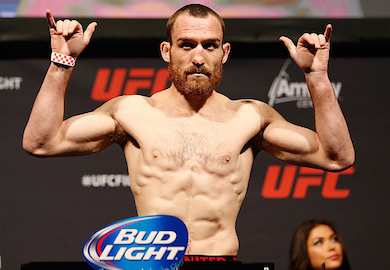 An exciting lightweight bout has been added to the UFC’s return trip to Jersey in the form of Pat Healy vs. Gleison Tibau.

UFC Fight Night 45 goes down on July 16 from the Revel Casino Hotel in Atlantic City. The card will feature a main event between Jim Miller and Donald ‘Cowboy’ Cerrone.

Both men are probably looking at a possible UFC exodus with a loss.

Tibau last saw action in December where, his opponent, Michael Johnson was able to secure a second round TKO at UFC 168. The defeat snapped a two-fight winning streak.

Healy, also coming off a loss, is still on the hunt for his first UFC win.

The Strikeforce veteran made waves in his debut, besting Jim Mille for three-straight rounds. Unfortunately though, he came up short in his post-fight drug test, failing for marijuana, which overturned the victory. Since that bout he’s gone 0-3 losing to Nurmagomedov, Green and Masvidal respectively.