Gustafsson Not Impressed With Fighter Pay: ‘I Make Enough To Get By’ 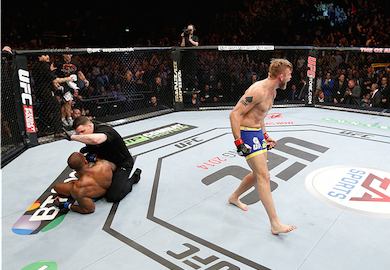 Light heavyweight #1 contender Alexander Gustafsson bounced back from his close decision loss to Jon Jones this past weekend when he knocked out Jimi Manuwa in the second round of their UFC London bout.

Gustafsson went on a Swedish radio show this week to speak about his career:

Radio Host: What kind of money is there in the sport? Is there a lot of money in it?

Gustafsson: No, I would’nt say that.

Gustafsson: No, I earn enough to get by and so that I can train full-time, but that’s it. I can’t buy a new Porsche.

Host: But if you had beat Jon Jones, how much more would you have earned? Can I ask you that?

Gustafsson: I don’t know the answer to that questions but it would have been considerably more. Then I could’ve bought a brand new Porsche.

Dana White has said that Gustafsson will get a rematch with Jones after his win over Manuwa.

This article appeared first on BJPENN.COM
- Advertisement -
Previous articleTate Favors Cyborg Over Carano for Rousey’s Next Fight
Next article“Rampage” vs. King Mo Set For “Alvarez vs. Chandler III” Pay-Per-View In Memphis