Home » UFC NEWS » Gustafsson: ‘Jones is doing everything he ca... 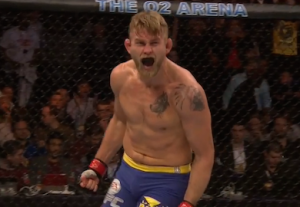 “It took me a while, actually, to get over it,” Gustafsson said. “The physical part of it was very easy. I wasn’t that banged up. I was back in training after two weeks. But it was the mental things, the motivation, and I was so disappointed over everything. So it took a while. But when I heard I was fighting Jimi Manuwa, I knew I had to let the past go and get 100 percent focused on Manuwa. I knew that guy was very dangerous and hits very hard. So I just let the past go and saw my next challenge.”

In a recent interview with MMAJunkie.com, Alexander Gustafsson, discussed his promised title fight with the winner of Jones vs. Teixeira, his last fight against Manuwa and more.

He’s picking Jones to win the fight, but stated in the interview that if Jones were to lose and an immediate rematch were to take place, he would move on and fight someone else.

He also dropped this nugget while on the air:

“In my mind, Jones is doing everything he can to not fight me. He doesn’t want to fight me,” he said. “So I think he’s trying to mix things up. But the only fight that makes sense for me right now is if he wins against Teixeira, is me fighting him.”