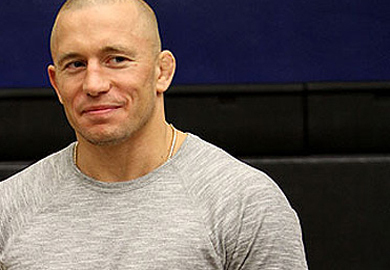 It wasn’t too long ago that Ronda Rousey used GSP’s looks as an example of the importance of marketing and using what you got to build your status.

She stated…”I’m like, ‘Dude, if GSP was butt ugly, you wouldn’t want to know who he is so much. I think he lucked out a lot that he’s Canadian. I love Canadians. They are the coolest, nicest, most patriotic people, and they will support their countrymen no matter what, and I think that’s commendable, but if GSP wasn’t really good-looking, and really Canadian, he would be really unknown.”

During today’s UFC !58 press conference GSP had a moment to respond and he said,

“It’s very flattering for her to say that I’m a good looking guy and I want to say she’s a very beautiful woman as well. I feel very flattered.”