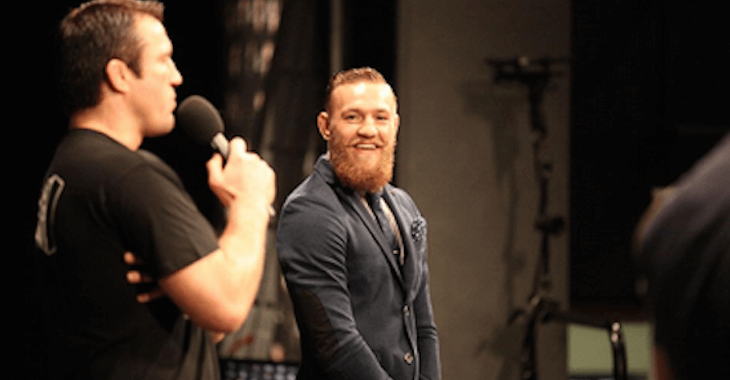 In addition to ‘Rush’ talking about his fallout with the UFC after his controversial win over Johny Hendricks back in 2013, he spoke about Conor McGregor.

McGregor will face Aldo at UFC 194, one of the biggest cards in UFC history, on December 12th.

St. Pierre explained to Sonnen the similarities between ‘The American Gangster’ and ‘Notorious’.

“I think, if I can make a comparison, of you[Sonnen] and Anderson Silva, I don’t know if I’m right, but it seems like maybe McGregor got into Aldo’s head a little bit. I don’t know [if McGregor can beat Aldo]. I guess we’ll find out. Aldo is a very smart guy, but Conor McGregor, the way he talks trash, there is a purpose to it.”

“Most of the guys who have fought Jose Aldo, they’ve been intimidated. Aldo has an aura of invincibility. A little bit like Anderson Silva had back in the day before you fought him. I think [McGregor] is mentally trying to break that aura of invincibility, but we’ll see. You need to break it physically, not mentally. It’s going to be a very interesting fight. A very nice clash of styles.”