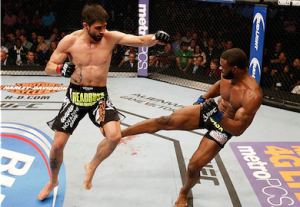 Will Georges St-Pierre come back, will he not come back? That is the question. The answer, so far, really depends on who you ask. According to GSP’s former trainer, Greg Jackson, he probably will. Jackson touched on that question while speaking with Sportsnet’s UFC Central. Jackson mentioned another interesting bit of information, regarding GSP and another of Jackson’s fighters, Carlos Condit.

Jackson said that GSP contacted him right after Condit suffered a torn ACL in his lost to Tyron Woodley at UFC 171, and offered up his assistance. Of course, the former welterweight champion suffered the same injury in 2011.

“Of all people, Georges called me right after that happened and said, ‘Listen, I know all that knee stuff to do and I’ll talk to Carlos and help out,’” Jackson explained. “So, we broke it down together and it was really cool that Georges was right here for Carlos when Carlos got injured the same exact way. Now of course Georges is injured [again]. Maybe they can rehab together. That was really cool. That just says a lot about Georges St-Pierre, like who that guy is.”

As Jackson mentioned, GSP has injured his knee again and will undergo surgery next week. What do you make of these two former opponents possibly helping each other rehab? Is it a classy move?