Home » UFC NEWS » Freddie Roach: GSP wants him in his corner for nex... 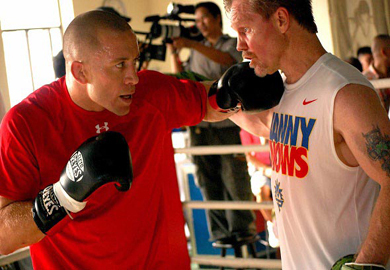 Well known boxing trainer, Freddie Roach, spoke with Yahoo Sports about Georges St-Pierre while he was in Macau training Manny Pacquiao. Roach has trained St-Pierre for some time now, working on the champs boxing.

Roach says that he was the one who came up with the game plan for St-Pierre’s title fight against Johnny Hendricks. He also mentioned that he had not spoken with GSP, but did receive a text message from him following his split decision win this past weekend.

“He said, ‘I’m not going to fight again unless you are in my corner.'” Roach then clarified that he did in fact mean physically, at the fight, in his corner. Roach has never been in a UFC fighters corner during the fight. Roach added that if his schedule allowed him to, he would love to be in St-Pierre’s corner for his next fight, which as of now is looking to be a rematch with Hendricks.

When talking about the actual game plan, Roach said that it was for St-Pierre to use his jab and inside hook in order to stifle Hendricks’ power. He explained that it was similar to what he did against Josh Koscheck at UFC 124.

“This guy [Hendricks], he doesn’t know anything, he just punches good with a big left hand. Pretty much with him, if you can stay away from that and nullify that, it’s not that tough of a fight. Georges did it, and he had success with it when he did, but he didn’t do it enough in the fight.”

What do you think, does having Freddie Roach in his corner give St-Pierre an edge in the rematch?