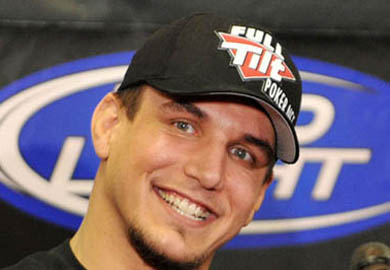 Frank Mir has been counted out of his upcoming fight with Junior Dos Santos before the fight even starts. Here, Frank describes a small part of his game plan in that, he actually plans to stand with arguably the best striker in the division. Sure, Every fight starts feet but working it into your strategy when such fights against Shane Carwin and Minotauro Nogueira saw Frank get rocked by fighters with less speed and technique than Dos Santos.
Either way, Mir wants his title back and he will do whatever it takes to get it back. Yes, I did question his strategy but remember this, Frank is a very intelligent human being who knows what hes doing in the Octagon.
This will be a classic heavyweight title fight that won’t soon be forgotten. Style versus style to declare the baddest man on the planet.

“I’m going to go ahead and strike with him, probably more than Carwin wanted to and some of these other guys and try to lull him into lowering his striking defense. If I get him into a rhythm where it’s a boxing match, it will be easier to shoot or take him down. If you are shooting right of the bat and are grabbing a leg and that person’s waiting for it, it’s like any combat tactic. It’s very easy to stop what you are expecting.”