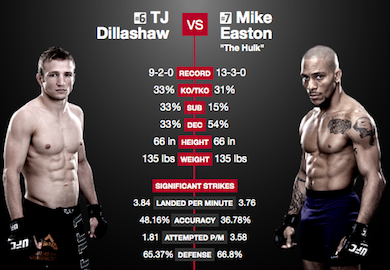 TJ Dillashaw lost his last fight against Raphael Assuncao, but being a part of “Bang Muay Thai” means he has the potential to improve tenfold between bouts.

Dillashaw proved that his camp is not a one-trick-pony when it comes to striking as he was able to land a takedown with ease early on. He shot for a takedown after he ate a powerful shot from Mike Easton. Easton was quick to get back up, but he was outclassed again on the feet. Dillashaw changed levels constantly throwing a leg kick milliseconds after throwing a head kick. Dillashaw looked like he was introduced to the game as a striker despite having a strong wrestling background. His superior pacing, striking and grappling gave him the first round.

Dillashaw continued to outclass Easton in the second. Whenever Easton would connect with a jab, Dillashaw would counter with two or three in a row of his own. He took the fight to the ground multiple times and would greet Easton with blows if he tried to make his way back to his feet. A bloodied Easton struggled to gain momentum at any point in the round as he was simply outworked. He attempted to lock in a straight-arm lock but Dillashaw escaped with ease and they met back in the middle of the octagon. The round would end shortly thereafter, giving Dillashaw a two-nothing lead.

Mike Easton was told on his stool that he would need to finish the fight in order to win, so you would expect him to throw some knockout-blows, right? There was only one problem: It’s hard to throw knockout blows when you’re facing a quick, conditioned machine like Dillashaw.

TJ Dillashaw slipped out of the path of Mike Easton’s strikes just after he landed his own. Mike Easton is surely in the elite class of UFC fighters in his weight division, but Dillashaw was on another level tonight.