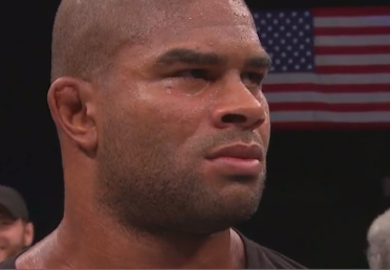 Alistair Overeem was knocked out in just the first round of his UFC Fight Night 50 bout against Ben Rothwell this past Friday. Many fans believed this was a do or die fight for Overeem given that his only win in the last 3-years came in a lackluster decision win over Frank Mir. Prior to his fight this past Friday, Overeem moved his camp to the famed Jackson-Winkeljohn camp in Albuquerque New Mexico.

After being knocked out by Rothwell, talk increased about a potential drop to light heavyweight for Overeem, who has been KO’d in all 3 of his UFC losses.

Earlier today we stumbled upon a fight fan who is claiming to have seen Overeem pre-fight, and what he was doing may shock you.

About a half hour before the main card started, he (Overeem) was out in a hallway making out with some hot chick.