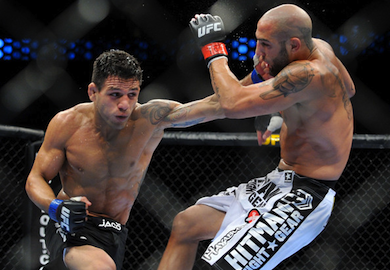 “I hope that a win over [Nurmagomedov] gives me a chance for the title. I’ve been working hard for that and it will be six wins in a roll. A win over Khabib will be a big step forward. Khabilov is a thought opponent, but the fight against Khabib makes more sense for me… I’m pretty sure my ground game is better than Khabib’s, but we’re going to fight MMA; it’s another game… I’m one of the most underrated fighters in the UFC. With hard work and my faith in Jesus my chance will come for sure.”

The UFC’s lightweight division is chock full of talent worthy of a title shot.

In a recent interview with MMAWeekly.com, Rafael dos Anjos, talked about his upcoming fight in Florida against AKA’s Khabib Nurmagomedov.

Both fighters will be look to ascend through the ranks in Orlando, but only one can.

Who’s it going to be and should the winner be crowned as the next challenger?