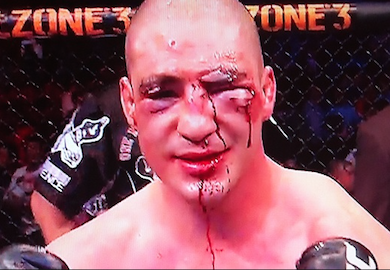 “To be honest, I don’t feel like I’ve been hit very hard. I think when I was fighting at 70, I took a couple hard hits and of course BJ (Penn) hit me hard, but aside from that, I think it’s more cuts than anything. I’m not taking a lot of damage, I’ve never felt foggy after a fight, I’ve never had a concussion in a fight and I’ve never been knocked out…As far as taking all the trauma, no, that’s not the issue. It’s the cuts.”

Let’s be honest, Diego gets hit. He gets hit a lot, he gets beat up, but he keeps on coming, and that’s why MMA fans love him.

In a recent interview with FOX Sports (seen above) he debates those facts, stating, he doesn’t get hit much’.