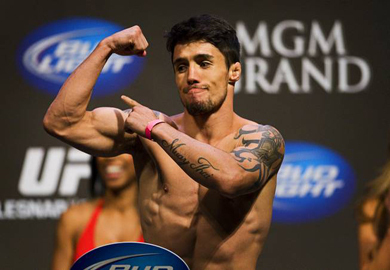 “I respected the people with whom I worked with at Nova União” said Nunes. “Independently of what I wanted though, I lowered my head there. There, Aldo was the champion really so I could never shout, ‘Oh! I am going to be a champion!’ Whenever I bow my head, I did it out of my heart in sincerity, I was never forced into anything. I took advantage of my time, but my time there is over. Now I’m on a team where people look at me and say, ‘Diego, you will be the champion. Let’s make you a champion.’ Thanks to Nova União because if I had not been there maybe I would not here today.”

As a UFC featherweight fighter, it must be hard living your daily life under the shadow of Jose Aldo. Which is why, according to this interview, Diego Nunes has moved camps to the popular X-Gym.