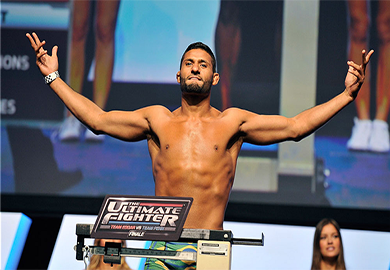 After a brutal first round KO loss to Eddie Gordon at the TUF 19 finale, Dhiego Lima will return to the Octagon on November 8th in Brazil against Pawel Pawlak

Lima is 9-3 in his professional MMA career. As one of the most promising prospects on TUF 19, Lima fought his way to the finale with two submission wins and a unanimous decision win. In the finale he was derailed by Eddie Gordon, who knocked Lima out in the first round.

His opponent, Pawel Pawlak is 10-1 in his professional MMA career. In his UFC debut, Pawlak suffered the first loss of his professional career to Peter Sobotta via unanimous decision at UFC Fight Night 41.

UFC Fight Night 56 takes place on November 8th from Brazil, and will be headlined by Shogun Rua vs. Jimi Manuwa.