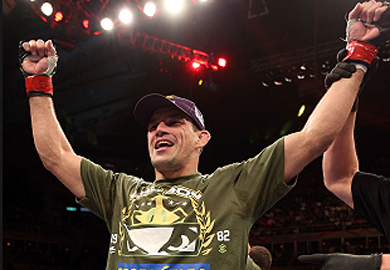 Before we get too excited about a showdown between Demian Maia and Nick Diaz, one thing needs to be made clear.

There has been no indication from any source that Nick Diaz will return to the cage outside of the off-chance he should be granted a rematch with GSP or a super-fight with Anderson Silva. (Both scenarios seem highly unlikely at this point.)

However, nothing is impossible and as reported on last night’s edition of “UFC Tonight” on FUEL TV, Demain Maia is trying to make a case for the bout.

According to FUEL TV’s, Ariel Helwani, the Brazilian submission ace believes that a fight with Diaz is the best career path he can take while trying to make his case as a title challenger.

Demian Maia currently sits high in the welterweight rankings and is riding a three-fight win streak in the division. The former middleweight title challenger is coming off a victory over Jon Fitch.

Nick Diaz, also sits in the top 5 division rankings and is fresh off a title challenge defeat at the hands of GSP. Following the bout, Diaz vowed to never return to action again.

Maia is seeking the bout for the upcoming pay-per-view event set to go down in Rio de Janeiro, Brazil where Jose Aldo will defend his title against Anthony Pettis.

Can Maia lure Nick out of retirement?