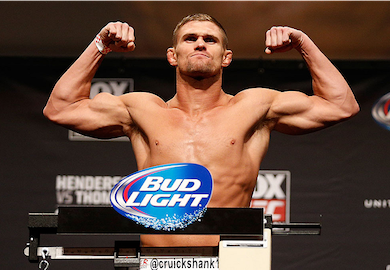 UFC officials announced today that a lightweight bout between Daron Cruickshank and Jorge Masvidal is the latest addition to July’s UFC on FOX 12 card in San Jose.

Daron Cruickshank (15-4 MMA, 5-2 UFC) was most recently seen in action at this month’s UFC Fight Night 40 event in Cincinnati, where he scored an impressive first-round headkick TKO victory over Erik Koch. That win marked the “Detroit Superstar’s” second headkick stoppage victory in a row, as he had previously defeated Mike Rio via wheelkick at January’s UFC on FOX 10 event.

Meanwhile, Jorge Masvidal (26-8 MMA, 3-1 UFC) will be looking to build off the momentum he earned by defeating veteran Pat Healy at April’s UFC on FOX 11 event in Orlando. Since joining the UFC as part of the Strikeforce merger, the 29-year-old has gone 3-1, earning victories over Tim Means, Michael Chiesa and Pat Healy. Masvidal’s lone octagon loss came against Rustam Khabilov, in a bout that was deemed “Fight of the night” at November 2013’s “Fight for the troops 3” event.

The UFC on FOX 12 event now includes the following contests: