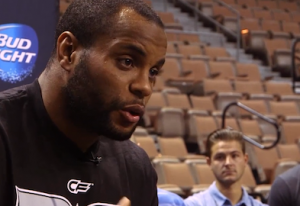 The UFC’s light-heavyweight division is packed full of guys looking to knock off the champ and arguably best fighter in the world right now, Jon Jones. Jones is set to face Glover Teixeira in Baltimore at UFC 172 on April 26. If Jones can get past Teixeira then he will face Alexander Gustafsson for the second time. But wait, what about Daniel Cormier?

The former heavyweight was successful in his debut at light-heavyweight, easily defeating Patrick Cummins. After that fight Cormier began to push for a shot at the title, asking the UFC and Jones himself to make him the next challenger. Cormier recently talked to MMAJunkie.com and mentioned that prior to the Gustafsson vs Manuwa fight this past Saturday, the UFC told him that if Gustafsson lost then he would be next in line for the title shot. Unfortunately, Gustafsson got the TKO victory over Manuwa in the second round.

“I want to fight. Listen, I’m 35 (years old) this month. I’m not going to sit on the shelf at this point. I feel great at this weight. I need a fight.”

“I don’t see the point in sitting out for, I mean, this is going to be a long time,” Cormier said. “If I was going to sit there and wait, I could potentially be 36 years old by the time I fight. Why would I waste a whole year of my career? I don’t have that luxury.”