Dana White: “UFC is worth $3.5 Billion, some would say more” 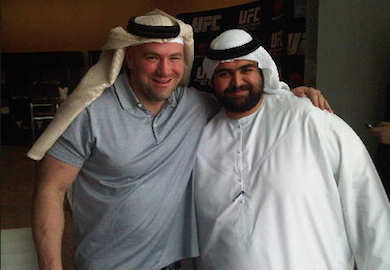 How much is the UFC actually worth? That’s the ‘Billion’ dollar question.

With the never-ending expansion of the world’s MMA leader it’s safe to say that the Fertitta’s small $2 million investment in the 90’s has paid off for them.

In a recent sit-down in London with Lucy Kellaway, columnist for The Highbrow Financial Times, the UFC boss, surprisingly, threw out a number, and it’s a big one.

Check it: (via The Financial Times)

I try to get him to give me a tutorial on the economics of cage fighting. The top three fighters, he says, have made fortunes of $30m dollars or more.

“We don’t let the media know a lot of the numbers. It pisses them off,” White declares. He tells me that the biggest source of revenue for UFC is pay-per-view TV – the most popular fights are watched by 1m people paying $50 each – but refuses to say anything more.

Using the oldest trick in the journalist’s book, I drop into the conversation a figure of $1bn, which was what the New York Times estimated the business was worth a couple of years ago. Is that number still correct?

White chews on a slab of mozzarella taken from his second starter and says nothing at all. Then he whispers, “$3.5bn. Some would say more.”

I ask how he reached that number and he replies, mysteriously, “We have numbers. You know what I mean?”

Yet in the US his critics claim growth has stalled, with fewer fans tuning in to watch fights. Two of the biggest champions – Georges St-Pierre and Anderson Silva – are not currently fighting.

“I’ve been listening to people tell me that we we’re going to fail for 13 years,” said White. “The media is full of s—. The company grows bigger every year.”

Both those stars are coming back, he insists, and reels off a list of other fighters. And it’s not just men, women now fight too. “Have you heard of Ronda Rousey?” he asks.

“She’s a rock star, man,” he says. “The women are different than the men – way more emotional. They’re a lot more catty. I’ve been trying to figure out women my whole life and now I’m trying to figure them out on a different level.”

Though fans love him, they don’t do so uncritically. He got a lot of stick last year when Georges St-Pierre, face mashed up and barely making sense after a fight, said on TV that he needed a break. At a press conference, White said the champion couldn’t have one. When I ask if he regrets being so unfeeling, he shrugs.

“That wasn’t about what you thought it was about. Here’s the bottom line; I’m never going to be the good guy, no matter what I do or what I say. I run a company with 500 of the baddest dudes in the world and I am the boss.”

Are bad dudes harder to manage than the norm?

“Nah. They’ve got smaller egos than journalists. They are smart guys. And some of them are smarter than me!”

I laugh, thinking he’s made a self-deprecating joke but then, seeing his expression, stop at once.

Our talk shifts to the future and I ask if the Fertitta brothers might one day sell up.

“Maybe,” he says, which isn’t the answer I’d expected. “At the end of the day we’re all young guys.” But for now the three of them love working together. Their secret? “No ego. People don’t believe that about me but I’m completely ego-free.”

As this is not the popular view of White, I ask him to explain. “

“I’ll tell you this. How many times do you think I’ve been offered to write a book? Big money. Three million. One time I sat down and I said, ‘I’m going to do it.’ But I got so fucking sick of talking about myself, by day two, I was done.”