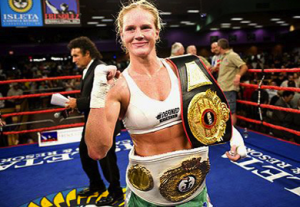 So, remember when Joe Rogan went on a radio station and said that there was going to be a “huge announcement” regarding Ronda Rousey and WMMA? Well according to UFC boss, Dana White, there actually isn’t one.

White spoke with the media on Thursday in Dallas, prior to this Saturday’s UFC 171.

The speculation has run rampant ever since Rogan promised big news. Rumors of Gina Carano’s return, Cris “Cyborg” Justino dropping to bantamweight to face Rousey, and on and on. However, another name that was thrown around for a while was the undefeated bantamweight Holly Holm and according to White, he’s going to be meeting with her and her management soon.

White said, “I’m meeting with her this week.” White wouldn’t comment on any specifics about the meeting when asked, instead he just reiterated his plans, “I’m going to meet them this weekend and see what happens.”

Is Holm the person to challenge Rousey, or does she need to prove herself in the octagon first?