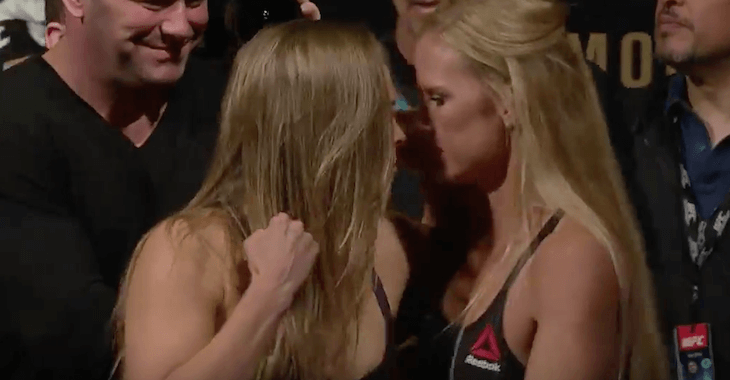 Holly Holm flipped the world of mixed martial arts on its head when she brutally knocked out Ronda Rousey to become the UFC Women’s Bantamweight Champion. Before getting dethroned, Rousey tore through any and all competition that the UFC brass put in front of her and was undefeated with a record of 12-0.

Rousey’s loss last night may have been one sided in favor of Holm, but there is no doubt in anybody’s mind that she deserves an immediate rematch. Her performance inside the octagon at “UFC 193” may not warrant one, but her previous eight championship defenses do. UFC President Dana White has this mindset and said during the post fight press conference that a rematch is likely imminent.

“The rematch makes a lot of sense,” White responded when asked about the possibility of a rematch. “I think the rematch is what people would want to see.”

Holm chimed in saying, “I’ve been on the losing side of a fight, and I wanted the rematch, I wanted to avenge my loss.” She continued, “With a champion like Ronda who has gone out of her way… above and beyond… to do great things, absolutely. She deserves a rematch… I think a rematch… that’s just kind of unspoken. Just common sense to me, I guess.”

Are you all in for a rematch? Who do you think would come out on top if they were to square off again? Share your thoughts in the comment section below!