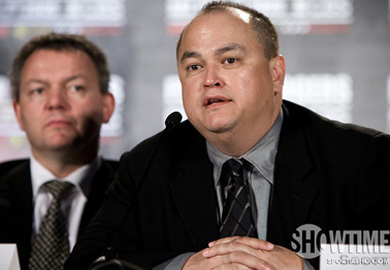 Since the UFC’s blockbuster purchase of rival organization, Strikeforce, the UFC has really run the show and turned Strikeforce into a much more marketable company. The UFC has also taken the liberty to import some top fighters to compete at the highest level of MMA in the UFC.

Such notable names include former Strikeforce champions, Nick Diaz, Alistair Overeem, Jake Shields, and Dan Henderson while also acquiring two exciting heavyweights in Antonio Silva and Fabricio Werdum. It seems the UFC has cleared out just about every current champion there is except for Gilbert Melendez and several newly crowner champions.

New champions have emerged to fill the gap temporarily as Daniel Cormier and Nate Marquardt have earned their respective crowns at heavyweight and welterweight and Luke Rockhold is still holding down the middleweight division, but it seems that if the UFC needs a champion to come and fight for the UFC, thats exactly what will happen.

On AXS.TV’s Inside MMA, however, Coker revealed that Strikeforce will not lose anymore heavyweights in the near future, to go off to the UFC to put on fights.

Coker went on to talk about this past event for Strikeforce and what he thinks is next for newly crowned welterweight champion, Nate Marquardt:

“Well, you know what, that’s something that Sean and I are going to talk about, today or tomorrow, but, believe me, if you look back at the title shots we’ve given our guys, they’ve all been tough. Our guys have been in some tough, tough match ups since we’ve been on Showtime, back in 2009, and that’s gonna continue. Sean and I will have a phone call, and we’re gonna figure out who’s the next guy for Nate.”

In regards to the rumors of emigration to the UFC Coker remained mysterious and gave no definitive answers:

“Well, here’s the situation. I think you guys know this, as well. We have a great contract with Showtime. They’ve been a great television partner with us, since 2009, and that’s gonna continue. We feel really good about that relationship. We’ve had some amazing fights, amazing athletes and delivered some amazing ratings for that network, and they love it. They love MMA programming. When a network wants to support you, that’s a great thing. So, we’re gonna continue having the fighters that are fighting on Showtime, right now, continue fighting on Showtime, and the UFC is gonna continue running the fighters that they have in their league. For right now, it’s gonna stay independent, but you never can say never, but for right now, that’s how it’s gonna run.”

As for the current champions, Coker stated that he can assure fans that these fighters will stick around to defend their Strikeforce belts:

In determining the next lightweight challenger, rumors have been swirling around about an unnecessary fourth fight between Gilbert Melendez and long-time rival, Josh Thomson. Coker said that with a victory last Saturday Healy looked great and could be next in line to offer a change in scenery for the champion, as Healy is one of the few who has never fought Melendez:

“I absolutely think that Pat Healy improved his stock. The fight’s not put together yet, but that’s something that we’re gonna look to put together by the end of the year.”

Finally, Coker revealed the Daniel Cormier will be fighting in what could be his last for Strikeforce against an undetermined opponent. According to the Strikeforce website, only two fighters remain in the heavyweight division with on being Cormier and the other being recent Cormier opponent, Josh Barnett, thus, an opponent will likely be a brand new signing or possibly even an import from the UFC:

For the latest Strikeforce and UFC news, stay tuned to BJPENN.com
This article appeared first on BJPENN.COM
- Advertisement -
This article appeared first on BJPENN.COM
Previous articleTim Boetsch Honored To Be The Man To KO Lombard | UFC NEWS
Next articleCormier Expected To Make Final Fight For Strikeforce In September | UFC News