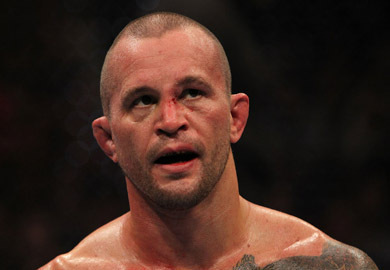 “You know, there always is [an interest in fighting again] and it never really left me, but the reason I kinda retired was I just wasn’t putting in enough time in the family and I just can’t commit myself to that kind of training anymore where I’m gone at all times every time, so, you never know. I always say if maybe something came up with a guy I want to fight, something happens to his opponent like a week out I might take that, so that could happen. Barring that? No I’m not, I’m not going to go back to training full time.”

“No, I don’t really care about [it being a title fight], it’s more about the type of person, you know I want – there’s a few guys, you know man like a Nick Diaz type guy who, I like Nick I wouldn’t really want to fight him, but maybe something like who, I like the way he comes forward to fight you, to punch you in the face and take you go out and just go the whole time and doesn’t really care about a decision. That’s the way I am, so, guys like that, you know, I always like the way certain guys like that fight. Maybe like a Carlos Condit, something like that those type of fights interest me. But, you know, those are kind of big fights that I don’t see happening unless their opponent pulls out at the last minute and they need somebody.”

Retired UFC welterweight fighter, Chris Lytle tells Middleeasy.com that he thinks about returning to the cage.