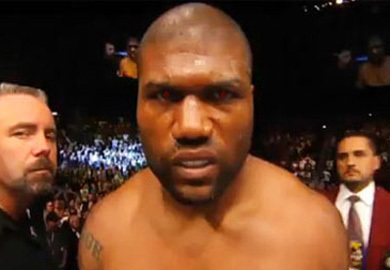 Quinton “Rampage” Jackson, is not a fan of Chael Sonnen. Chael Sonnen is the reason he no longer watches the great sport of MMA. If Chael Sonnen was a food Rampage Jackson would not eat him and if he was offered a fight against the Oregon Gangster, Rampage admits he would duck him.

Rampage wants nothing to do with Chael Sonnen in this life or the next and he explains that concept in more detail to ESPN:

“Not many fighters respect Chael Sonnen because he’s in the wrong sport. He should be in pro-wrestling with a mouth like that

I’m not going to stoop to his level. Why is he even worried about me and my fight? It has nothing to do to him. He’s probably the only guy I’d ever duck, I’d duck him in a second because he’s a boring fight.

He’s one of the fighters that’s making MMA go down, he’s like a cancer to our sport. He’s a great wrestler but he’s boring as hell. You know what he’s going to do, he’s going to try and take you down and lay on you. Why do people even buy tickets to watch this guy fight?

He’s a cancer for our sport. He’s the reason why I don’t even watch my own sport because a lot of fighters fight like him nowadays. That’s not what MMA was built on. MMA was built on exciting fighters where people try to end each other.”