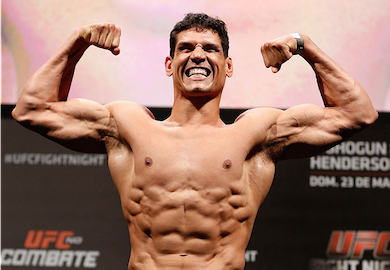 UFC middleweight Cezar Ferreira is looking to get back on a winning track by beating Andrew Craig this Saturday at UFC Fight Night 44 in San Antonio.

Ferreria was knocked out by CB Dollaway in March at UFC Fight Night Shogun vs. Henderson 2. Ferreira spoke to MMAJunkie.com about his loss to Dollaway as well as his upcoming fight this Saturday.

“I still say that C.B. got lucky, and I haven’t forgotten him,” Ferreira told MMAjunkie. “Now I’m concerned with Craig, but after that, I want payback from Dollaway. If I fight him 10 times, I’ll beat him 11.”

“He’s a new-generation athlete,” Ferreira said. “He does everything – striking, wrestling and jiu-jitsu. He’s very complete. My plan is to start fast and pressure him constantly, putting him in bad spots standing or on the ground.

Ferreira’s opponent, Andrew Craig has staggered his last 4 fights, and is most recently coming off a loss to Luke Barnatt at UFC Fight Night Machida vs. Munoz.

While some criticized Ferreira for jumping on Dollaway after rocking him, which ultimately led to Dollaway landing a counter punch and knocking him out. Despite that, Ferreira said he will not be cautious going into his fight with Craig.

“I stepped into the cage to win the combat,” Ferreira said. “I did everything in my power. When I saw the opportunity to knock him out, I took it. I hit him and he backed into the fence. I proceeded to attack to finish the fight. That’s when he successfully countered. There are times in life when you have to accept the risks.

“I dislike tying up my opponents. MMA is not only fighting. There’s also an entertainment aspect. And I like to put on a show. I always go after the knockout. And next time I’ll get it. I think Dollaway got lucky when my own punch didn’t connect.”