Browne: ‘Overeem Will Learn To Be A Team Player Or Be Out At Jackson’s’ 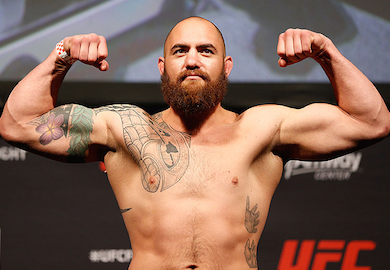 “I think everybody’s due a chance. Just because he wasn’t the best teammate there, doesn’t mean he can’t be a good teammate here. When he comes to Jackson’s, the stuff that all his other teammates were saying he did, is not going to fly at Jackson’s. He will not have the opportunity to even let it get that far. Does that make sense? If he says, ‘hey coach, I’m going to bring my own guys and work out at night.’ Coach Jackson will be like, ‘you can either train with the team, or you can leave.’ I feel like a lot of people, because he’s Alistair Overeem, have catered to him. I feel like Blackzilians probably catered to him, so he got used to it and he felt like he could throw his weight around a little bit. At Jackson’s, it’s not going to fly. You’re either part of the team or your not. If you’re not part of the team, you can get the hell out out of here. We don’t need you here. We didn’t ask you to come here, you asked to come here, so you see something here that you need. So, you’re either part of the team, or leave.”

This article appeared first on BJPENN.COM
Previous articleSilva Coming To America: “I need to learn new stuff”
Next articleVIDEO | Inside Dillashaw’s Dream Fight For The UFC Belt
© Newspaper WordPress Theme by TagDiv