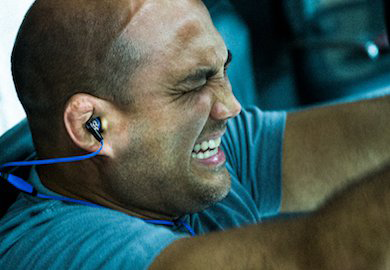 BJ Penn is set to make his octagon return when he collides with Frankie Edgar in the culmination of their season as coaches of ‘The Ultimate Fighter’. This will be their third meeting and unlike their first two at lightweight, this contest will take place in the featherweight division.

‘The Prodigy’ has not fought for the UFC since December 2012 when he suffered a tough loss against Rory MacDonald, but he has used that time to refocus his life and take a step away from the competitive lifestyle. In a recent interview with ‘The Roar‘, Penn explained “After the fight I just did yard work and farming, hanging out, raising my kids. Trying to live a regular life because I have always lived an up and down life, always involved in sports.”

With such a long time between fights, critics may question whether or not ring rust will be a factor. However, BJ Penn feels he is well prepared to make his octagon return in July. “I think the time off was the best thing for me,” Penn stated. “I’ve been doing this for so long it’s almost like it’s monotonous and so repetitive that sometimes you want to shy away from it. Now is the time, I feel like it’s my time!”

After watching Anthony Pettis dethrone Benson Henderson as lightweight champion, Penn called UFC President Dana White with a plan that would ultimately lead to him squaring off with Frankie Edgar again. Penn wanted to defeat Henderson in a bout simply to get another chance at defeating Edgar, to which White responded if he wanted a bantamweight title shot instead. Penn simply responded, “Let me fight Frankie Edgar. It’s the only reason why I’m coming back.”

At the age of 35, BJ Penn is making his return to the octagon when most fighters would consider walking away from it. With TRT out of the question, TheRoar asked ‘The Prodigy” what he thought of the recent ban of TRT throughout the world. “I think that’s the best thing that could have ever happened to the sport. You know, right now I would be a great candidate for TRT because of my age. Because everybody knows I have no problem with testosterone, that’s the last problem I’d ever have.”

Penn expanded on the subject, “…from an age standpoint I’m sure I could qualify for TRT, would that be right? …It’s wrong for me to fight a 20 year-old kid who has no experience and then I try to make myself young like him. I don’t think that’s the way sport should be played.”

The nineteenth season of ‘The Ultimate Fighter” will air on Fox Sports 1 with the season debut on April 16, 2014.