Bisping vs. Le, Lombard vs. Kim Official For August In China 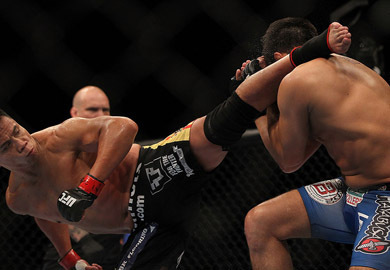 The UFC is returning to China and they have two intriguing bout sets.

The two bouts are set to take place on a “Fight Night” card in Macau, China. Bisping-Le will be the evening’s main event, while Lombard-Kim will sit in the co-main event slot. The UFC Fight Pass card will take place on August 23 from The Venetian Macao’s CotaiArena.

Le hasn’t seen action in nearly two-years. The former Strikeforce champ was seen last as a coach on TUF China. Fighting-wise, he last saw action with a brutal K.O. victory over Rich Franklin. Bisping, one of the original TUF Champions, had a disappointing return to action when he fought Tim Kennedy and got out-wrestled in route to a decision loss.

In welterweight action, both Kim and Lombard will look to continue their climb in the welterweight rankings. Both are top-10, 170 pound fighters.