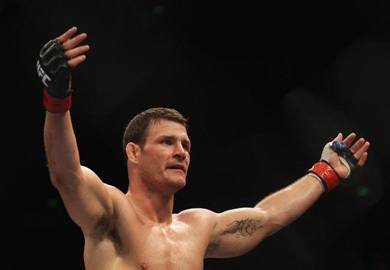 “I was disappointed Vitor Belfort started talking in tongues when asked about TRT recently. He had a little more to say on Monday when he was asked directly about my concerns that all his recent UFC fights were won by illegal punches to the back of the head. In between lengthy references to the New Testament, Belfort basically said he doesn’t care if he hits opponents behind the head. How he’s gotten away with this in his career is a mystery to me, and I hope we have a strong referee who has the balls to do something about it – if it happens – with thousands of Belfort supporters screaming in the stands. And of course it is down to me to make sure I’m not put in a position where he can unload these kinds of shots. Vitor has one or two rounds to beat me – or try to hit me behind the head – and then his gas tank will be empty and the fight will look like that Rocky vs. that dead cow.”