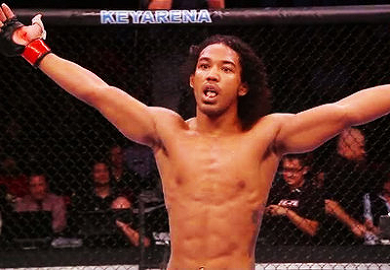 By Evan Stoumbelis
Saturday night fans saw an action packed UFC on Fox event, where Matt Brown stopped the return of Mike Swick, our very own BJ Penn fought with the heart of a champion from bell to bell against Rory MacDonald, Alexander Gustafsson cemented his place among the top light heavyweight contenders, and Benson Henderson put on a dominant performance with a decision win over Nate Diaz to retain his lightweight title.

Just seconds after the final bell rang Ben Henderson stood up and walked with his arms raised to the center of the octagon. Fans caught a glimpse of something sticking out of the corner of his mouth, seconds later we saw it in clear view, a toothpick had emerged from the side of Henderson’s mouth. This wasn’t the first time we saw the toothpick either, Henderson can be seen with the toothpick poking out at the end of the 3rd round before his cornermen told him to put it back in his mouth.

Joe Rogan brought it up in his post fight interview asking Henderson where he got the toothpick, and if he had it in his mouth the whole fight. Henderson responded with a smile on his face, “No. That’s dangerous.”

During the post-fight press conference Henderson was again asked about the toothpick, he responded with “I cannot confirm nor deny that. I normally do. I have been through practices, and when I spar, and when I fight. It’s a bad habit, but whatever. I have gotten away with it so far.” Later in the press conference he stated: “I was joking, I do not have a toothpick in my mouth during my fights, I was being facetious.”

Dana White commented yesterday on the incident saying “Let me tell you what, I saw a toothpick pop out of his mouth when he walked back to the corner. That is the craziest thing I have ever seen. That is so not legal it’s not even funny. It’s incredible. I’ve never seen anything like it in my 43 years on Earth. I doubt (he gets fined); I mean why could you fine him for it? But I think that the athletic commission will be looking for that in the future.”

Benson allegedly only keeps a half sized toothpick in his mouth, however there are a few things wrong with this situation, first off the possibility of him swallowing it is fairly high. MMA is a high intensity combat sport, his main focus during a fight is not the placement of a toothpick in his mouth, it’s dodging strikes, stopping takedowns, and defeating his opponent. There are many variables when it comes to situations causing Henderson to swallow his toothpick. If he were to get knocked out it could easily slide down the back of his throat causing serious health problems, regardless of how soggy it is.

As Dana White mentioned, it is not legal to have in the Octagon, it is a foreign object, which is not permitted in the Octagon, and from now on you can bet that this will be checked before Benson steps into the Octagon.

What’s your take on the situation Pennation?