Bas Rutten Does Not Speak Highly Of Alistair Overeem 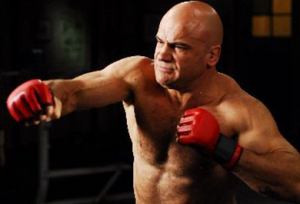 Bas Rutten, former UFC heavyweight champion and current co-host of Inside MMA, spoke with Submission Radio. Rutten had plenty to say when it came to fellow Dutchman, Alistair Overeem.

Props to Bloodyelbow.com for the transcription

“Like I said before, when I talk about this, people (are) gonna say like ‘aww he’s a hater because he left Golden Glory’ and it’s not. I always said it. It’s like when I said he had a glass jaw, people go like ‘aww he’s just saying that’. I said look at his record dude. Look at his record between 2005 and 2007. Shit I think he got knocked out like Five times. And he knows he has that also but, they gave him this whole new fighting style there at Golden Glory at Maeng Ho gym with Cor Hemmers which is single shots. One hand at his jaw and with the other hand, you know, knock out. And everything he can throw. If he throws a left hook to the head, right hand at the jaw, if he throws a right straight, left hand on the jaw.”

“We know it now, you know. He got caught on steroids, then he got tested the next time he couldn’t use and he lost. His testosterone – I heard, read on the internet, I’m just saying that it doesn’t have to be true but it was out there in the news everywhere – he had a level of One hundred and sixty. So now Nevada says, well that means with prior usage you can’t fight in Nevada anymore. And I think it maybe did something to him mentally, I don’t know. His last fight he fought good again. I thought in his last fight he used power but not as much power against Mir. He was always very careful, you know, not to run out of gas, he went the full distance, he looked really good all the three rounds. He doesn’t throw as hard anymore but he doesn’t need to because he has that power. But coming back from getting Knocked out a couple of times, it’s a hard one for him you know, and if he can come back, this was just, people were complaining that he didn’t finish Mir. But you have to understand if you get knocked out three times in a row it does something to you mentally, you know, so he played a very smart game. He came in, he said ‘I’m gonna win this fight, will get my confidence back and now I’m gonna go to the next fight’. And now next fight were gonna see what he’s made off.”