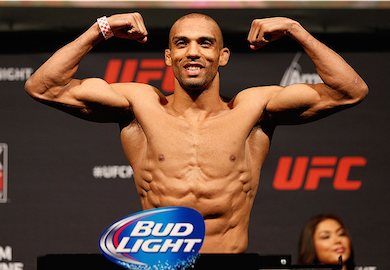 Lightweights Edson Barboza and Evan Dunham are set to square off July 16th at UFC Fight Night 45 in Atlantic City.

Both Barboza and Dunham are coming off submission losses to Donald ‘Cowboy’ Cerrone, who is headlining the card opposite Jim Miller.

Evan Dunham is on a two-fight losing streak. The Jiu-Jitsu black belt went 1-2 in 2013, and will be looking to bounce back from his submission loss to Donald Cerrone at 167 in November.

Edson Barboza on the other hand suffered the second loss of his professional career recently after getting dropped with a jab by Donald Cerrone in April at UFC on Fox: Werdum vs. Browne. Prior to that Barboza was on a three-fight win streak.

UFC Fight Night 45 takes place in Atlantic City on July 16th and will be headlined by Donald Cerrone and Jim Miller. Below are the official bouts for the card.