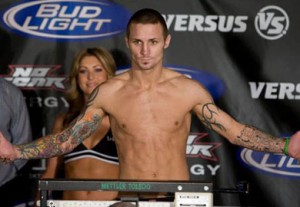 Renan Barao is solidifying the title of “Interim Champion” more than almost any fighter in the UFC ever has. After successfully winning the belt over Urijah Faber then at then defending it at the expense of Michael McDonald, he is set for (at least) one more test before Dominick Cruz returns from a long ACL injury layoff. Cruz received his second surgery in December.

Barao will welcome WEC veteran Eddie Wineland to the main event at UFC 161 June 15, 2013 at the MTS Center as the UFC graces Winnepeg, Manitoba, Canada for the first time.

Wineland, always an impressive striker, has recently made noticeable strides in his game with a stoppage of the tough veteran Scott Jorgensen in June, and a decision dismantling of Brad Pickett at UFC 155 in December. Wineland has a crisp and technical ability to trade successfully on the feet with every fighter placed in front of him, and he will pose an interesting task for the wildly athletic and talented Barao.

As this bantamweight title fight sets up another exciting championship match at 135 pounds, another exciting possible contender looms in the balance of Urijah Faber vs. Scott Jorgensen, who are slated to headline the Ultimate Fighter Finale card at the Hard Rock in Las Vegas in April.