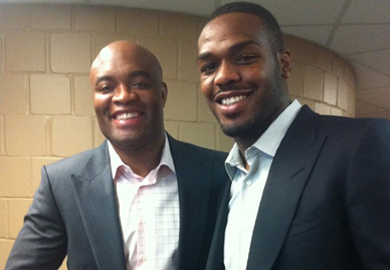 “Since I started training martial arts, I never thought about the money. I think everything I was able to get was because I always did it with pleasure and love because when I started there was no money in this. I don’t fight for money. Obviously, the money’s important, we all need money, but I don’t fight for the money. This is not something that I would like to happen because the times I’ve seen Jon Jones, he’s always mentioned that he would not like to fight, but we are UFC employees. I wouldn’t like this to happen because on our team we have (Antonio) Rogerio Minotoro (Nogueira), we have (Rafael) Feijao, we have (Wagner Prado) Calderon, we have other athletes in his division that can fight him. I’m getting old guys, I’m retired, I’m nearly there, I’ve only got another five years left, leave Jon Jones to them.”

During Saturday’s post UFC 153 media activities UFC middleweight champion, Anderson Silva, made it clear that he is not interested in a super fight with reigning 205 king Jon Jones.

Is Silva making the right call and is anybody buying what he is selling?

Could it be that Silva is holding out for a mega payday for this mega fight or is he really not interested?