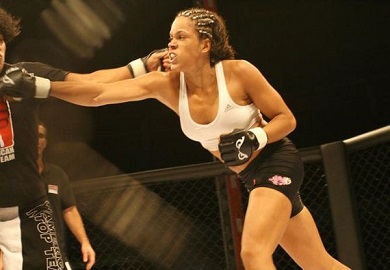 Amanda Nunes will be fighting Cat Zingano at UFC 178 in September. The fight will serve as Zingano’s return to the UFC after a layoff that lasted over a year due to a knee injury.

Nunes is 2-0 in the UFC, and should she defeat Zingano, will likely get a title shot, given that Zingano was up for one before injuring her knee.

Nunes spoke to MMAJunkie.com about her fight with Zingano, and why she is 100% sure she can beat Ronda Rousey.

“I’ve been waiting for this fight. I always put in my Twitter, tagging (UFC matchmaker) Sean Shelby and (UFC President) Dana White all the time, saying I want this fight. I need a fight like this to prove I’m ready for the title shot. Then I got the call that it happened, and thank God.”

“When I started working with her, the things she told me were most important to her were fighting Ronda Rousey and being a world champion,” McCarthy said. “We started to look at, what’s going to be the fight that helps her get there?”

“I reached out to the UFC, they were happy about that Cat Zingano matchup, and it worked out for us. The timing is absolutely perfect.”

“I think the first minute she’ll come to strike, and then when she sees I’m better standing up she’ll try to take me down,”

“I think for sure, 100 percent, I beat Ronda Rousey after this fight with Cat. We wait for these moments. You can show that you’re prepared for the title only if you get these very big opportunities. I’m ready.”