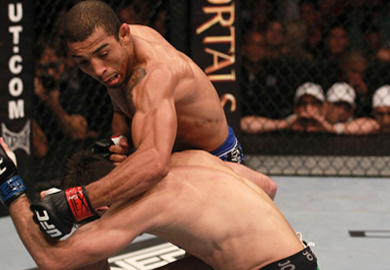 Current featherweight champion, Jose Aldo (21-1), is the heavy favorite in his upcoming bout with Erik Koch (13-1) at odds of around 4 to 1. The two will face off this summer on July 21st at the Scotiabank Saddledome for UFC 148 in Calgary, Alberta, Canada.

This comes as no shock to most fans as Koch has received a lot of indirect criticism from fans arguing that he isn’t the true number one contender. Koch is currently riding a four fight win streak since his last last to Chad Mendes in the WEC and is unbeaten in the Octagon with a Knockout of the Night performance in his debut.

His last bout with TUF alumni, Jonathan Brookins was a one-sided affair that didn’t exactly highlight Koch’s talents. Not to take anything away from the 23-year old, but for someone to defeat Jose Aldo, they need to be an all around powerhouse who is never vulnerable no matter where the fight ends up. Hopefully this is what we get from Koch as watching a champion truly get tested never gets old. We will see come July if Koch can silence the critics, and the odds.

For Jose, he will look to silence another rising star as he comes off of his first round knockout win over Chad Mendes in his native Brazil. MMA fans remember the show Aldo put on after the fight, leaping into the crowd and being devoured by a sea of his countrymen in a truly unforgettable moment in UFC history.
Aldo is on a tear, going 3-0 in the UFC and going without a loss since 2005, signifying his first and only loss to date. Aldo is a flashy striker with skills on the ground and resembles a lighter Anderson Silva with his unorthodox striking and aura of invincibility which nowadays is carried by so few fighters.
This fight will be another spectacular Canadian main event, one that will mark a pivotal moment in the careers of a champion and a young contender.