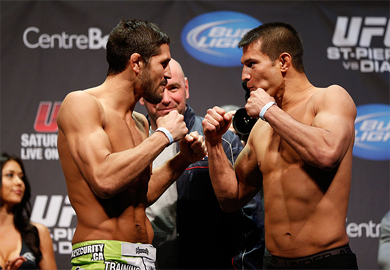 Later tonight fans will see the long awaited match-up between Georges St. Pierre and Nick Diaz for the welterweight strap, but before that fans tuned in to FX for five exciting fights.

In the second fight of the night we saw Jordan Mein defeat Dan Miller by TKO. After slipping out of an unorthodox armbar in the first that was extremely close to finishing the fight. Mien connected with a stiff jab to drop Miller with 30 seconds left in the round. With his TKO win over Miller, Mein wins in his Octagon debut in impressive fashion.

In the third fight of the night we saw Darren Elkins defeat Antonio Carvalho in what was considered by some to be a premature stoppage with Carvalho hitting the mat and immediately standing back up, however referee Yves Lavigne stepped in and stopped the fight before Carvalho had a chance to recover.

In the second to final fight of the prelims fans saw T.J. Dillashaw fight Issei Tamura. After missing multiple head kicks in the first round Dillashaw connected in the second with a fight ending roundhouse kick, extending his win streak to 3.

Last but certainly not least fans saw Patrick Cote fight Bobby Voelker to a decision. In what became a back and forth standup fight we saw Patrick Cote prevail, increasing his win streak to 2, making him 2-1 in his last three.

Tune in to to main card now, only on PPV, and as always, stay on BJPENN.COM for updates on the main card.