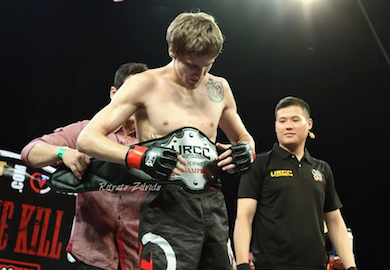 At a staggering 6-foot-4, the UFC’s newest addition to the featherweight division, Will Chope has been signed and given his first contractual UFC obligation.

The two UFC rookies will square off at UFC Fight Night 34, the event which serves as the UFC debut in Singapore set to go down on January 4th, 2014.

At just 23-years-old, Chope is a top MMA prospect hailing from America but living in Asia over the course of the past few years. The ‘World’s Tallest Featherweight’ has won 14 straight fights, most recently dispatching the King of Pancrase, Takumi Nakayama via TKO.

His opponent, Magomedov is getting an early break in the UFC after a short pro-stint of just two-years. The Russian based fighter is one of many imports from the region with high hopes for greatness. Undefeated in his career, he has finished every single man to step across from him, including seven wins this year alone, having all but one stopped in the first frame of action.

UFC officials have yet to confirm this announcement, but our sources should hold up.