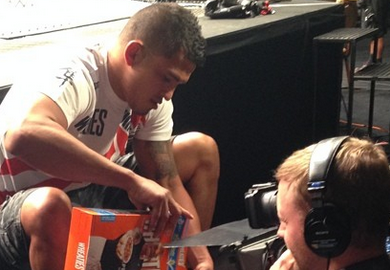 As the UFC continues to grow and become more mainstream, we’ve seen some of it’s athletes score sponsorship deals with major organizations.

Jon Jones and Junior dos Santos have linked up with Nike, while former UFC champions Anderson Silva and Georges St. Pierre have scored deals with Burger King and Gatorade respectively.

UFC lightweight champion Anthony Pettis can now add his name to that list, as “Showtime” was recently revealed as the newest member of “Team Wheaties.”

The popular cereal staple announced the news via their official Wheaties account, along with a photo of Pettis. Anthony replied with a tweet of his own, expressing his gratitude:

@Showtimepettis: “It’s an honor to be a part of the @wheaties team!! #TeamWheaties #blessed”

There is no word yet as to when Pettis will be on a cereal box cover, and no other details have been released at this time. Stay tuned to BJPENN.com for further updates.