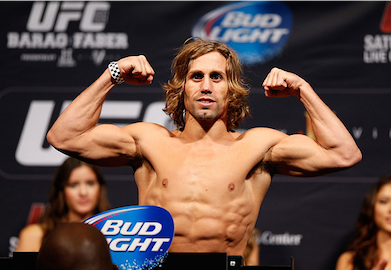 The UFC’s #2 ranked bantamweight, Urijah Faber (30-7 MMA, 6-3 UFC), is coming off a February title fight loss to champion Renan Barao. Prior to the loss, “The California Kid” had strung together four-straight victories, which included wins over Michael McDonald, Iuri Alcantara, Scott Jorgensen and Ivan Menjivar respectively.

Meanwhile, Alex “Bruce Leeroy” Caceres (10-5 MMA, 5-3 UFC) has won four of his past five fights, with his lone blemish being a no-contest, this after a split-decision win over Kyung Ho Kang was overturned when he tested positive for marijuana. Caceres’ most recent effort saw him score a third-round submission victory over the highly touted Sergio Pettis at the UFC on FOX 10 event in Chicago. That victory earned “Bruce Leeroy” two “Performance of the night” awards, resulting in $100k in bonus money.

Who do you have winning this key bantamweight tilt? Sound off Penn Nation!