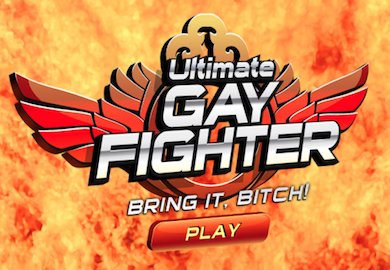 Everything about this is real, none of it is fictitious.

That being said, it’s certainly an interesting topic.

In a report coming out of the computing and video gaming world, a cellphone application titled ‘Ultimate Gay Fighter’ has been forced to change their name by an undisclosed Mixed Martial Arts Promotion.

The 2D fighting title is currently in development for iOS and Android.

“We have a trademark pending, but the prospect of a potential lawsuit is very intimidating,” founder Michael Venker told Polygon. “We don’t have the funds to compete with their take-no-prisoners approach.”

“We offered them solutions, but this company remains firm in believing our Ultimate Gay Fighter brand threatens their brand, despite vast differences in our customer base and product.

“This potential legal situation already delayed the game several months as we deliberated our options. Our mobile gaming product is vastly different from their brand and related products. At the end of the day, our strong belief in releasing this game remains most important, and we did not want to lose everything we have worked so hard for.”