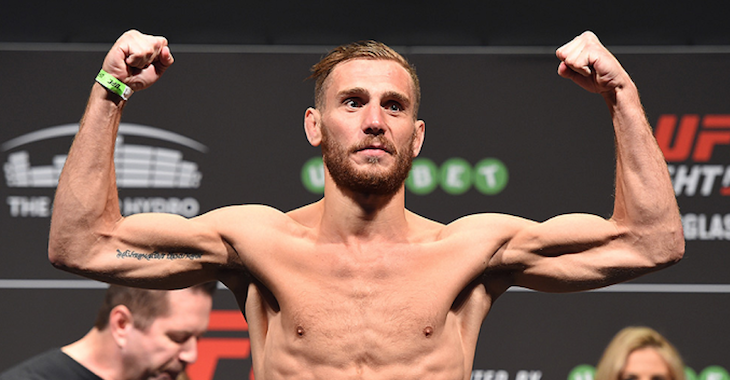 Lightweights Michael Lebout and Teem Packalen squared off in Glasgow.

Teem went for a takedown early, but failed to get it. Lebout pushed him to the cage. They clinched, then Lebout got reversed and taken down. Teem started working from full guard. He managed to work to half guard. Lebout scrambled and got the reverse on the ground. Lebout stayed on top for a while, then stood up and dove down with a hammer fist. He maintained top position. They rolled and Teem took adverting and reversed. Teem worked from half guard and started landing big elbows. He maintained the position until the end of the round.

In the second round Teem went for takedowns early and often. He failed on the first two attempts. Lebout stood over Teem, who sat on the mat and landed leg kicks. The referee eventually let him stand up. Lebout started landing big punches to the body. Teem landed a nice counter left. Teem shot in for a takedown, Lebout sprawled and took top, he came down with a knee that looked like it grazed Teem’s head. The referee stopped the fight for a moment to check Teem. The fight continued and Teem landed a few big punches. Then he shot in again and got the fight to the ground. Teem went for an ankle lock, but failed to get it.

In the third they came out swinging. After a few exchanges Teem went for the takedown again. Again, Lebout sprawled and Teem stayed on the ground, trying to draw Lebout down into his guard. Lebout just stood over him, the referee let him up. Teem finally gets him down late in the round. After top control Lebout reverses and takes top position. He stood up, then let Teem get up. They started swinging again. Teem goes for a spinning backfist. Right at the end of the round it goes to the ground again. Lebout gets up and jumps down with a big punch. It was an extremely close fight.