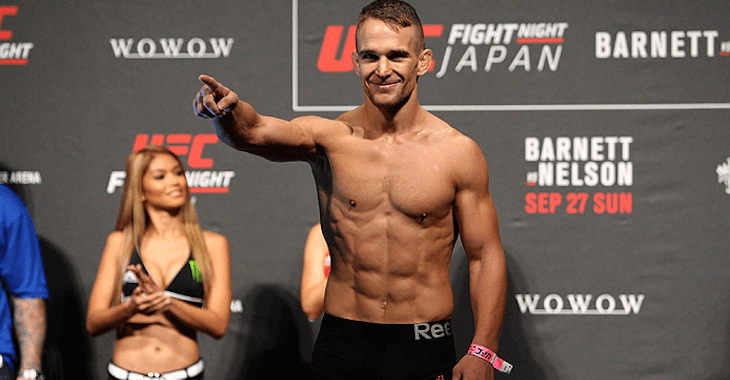 Nick Hein took on Yusuke Kasuya in the third fight of the evening.

In the first round Hein came out, landed a few nice leg kicks, as did Kasuya. Then at one point they clinched and Hein threw a knee. Kasuya turned away immediately, in pain. He had eaten a groin shot. The referee stepped in and called a time out, Kasuya dropped to the mat. Kasuya looked to be in some serious pain. He stayed on the ground for a while, but eventually got to his feet and walked around. For the rest of the round they stayed on their feet and looked to strike. They both looked pretty even on the feet, looking to get in with a quick burst of one or two strikes, then get out fast. No one really landed anything significant.

Early in the second they broke from their technical striking and got wild with punches for a moment, both swinging bit shots. The second round took place on the feet and again it was extremely close. At times it seemed like Hein was the busier fighter, but really could have gone either way

In the third Kasuya thew a front body kick but got clipped with a big punch from Hein. He smiled and gave Hein a high five. Hein later landed a nice combo that sent Kasuya’s head back. Hein managed to land some nice leg kicks in the third as well. Hein got a very brief takedown late. With about 5 seconds left they attempted to really throw down, but nothing really happened with that. Close fight, not a lot of real entertaining moments.