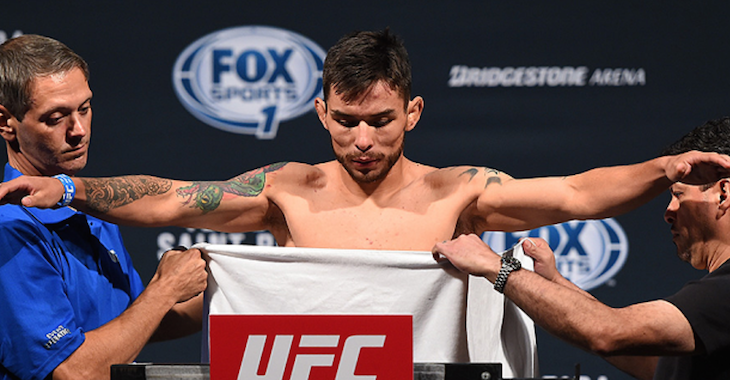 The first fight on the main card went down between Ray Borg and Geane Herrera.

Early in round one Borg secured a takedown. He worked to move to half guard. Herrera tried to reverse but Borg held on and stayed on top. Borg went for a guillotine. He was on top. Herrera tried to roll but Borg just locked it in deeper. He rolled back and Borg let it go, while staying on top position. Herrera threatened with an ankle lock but lost it. Borg, on top, went for a kimura. He let it go and took top position in half guard. Herrera showed good defense on the bottom, preventing Borg from getting mount. Borg did get to side control. Both fighter stayed busy on the ground. Borg got the mount and tried for an arm triangle. He lost it and Herrera moved him back to full guard.

Early in the second Borg threw a massive spinning kick but missed. Then Borg went for a takedown and got it. Right away Herrera went for a Kimura from the bottom, but lost it. Borg moved to mount and got a seriously tight guillotine. Herrera looked in trouble but he survived and got out. Still, Borg worked from the top. Every scramble it seemed like Borg was going for a different submission. Herrera just couldn’t do anything to get Borg off of him. Borg moved to mount but Herrera moved him off and back to full guard. Borg was literally on top for just about the whole round.

Right away Borg went back to the takedown and got it in the third. Herrera did land a massive elbow that cut Borg bad. He was gushing blood from top position. Eventually the referee stopped it so the doctor could check it out. He let it go and they continued to fight. The blood kept pouring out Borg while he stayed on top of Herrera and looked for submission after submission and landed ground and pound. Herrera reversed and almost had mount but Borg got out and landed back on top, but Herrera threatened with submissions. Borg got out and started working from top. Borg tried for a guillotine again, from top then moved to side control. Right at the end of the fight Borg got mount, then went for a rear naked choke when Herrera turned over. He ran out of time though.