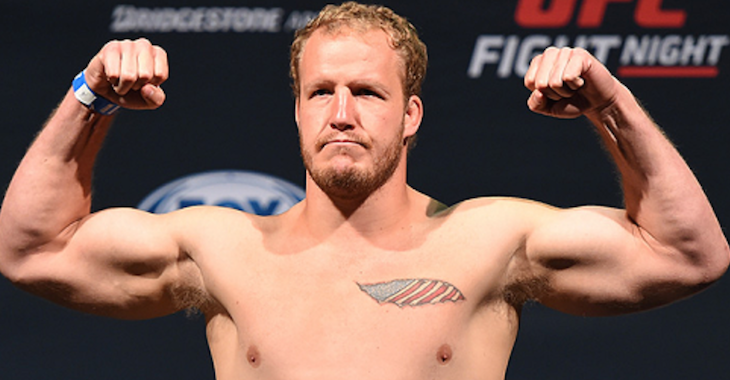 Heavyweights collided in the octagon when Timothy Johnson took on Jared Rosholt.

There was a feeling out process, with both fighters remaining patient. Eventually Rosholt pushed Johnson to the cage in the clinch. Johnson reversed him, but Rosholt regained the position. Johnson eventually got Rosholt down for a brief moment before he jumped back to his feet. Johnson kept Rosholt on the cage. Rosholt threatened with a standing guillotine. He let it go. The referee separated them for inactivity.

Rosholt got the takedown and went right into mount. He started looking for the head and arm choke, then switched to the other side and worked from there. Rosholt trapped one of Johnson’s arms with his leg and landed a few big shots before the round ended.

Johnson landed a nice leaping jab to start the second. Then he landed nice left hand before Rosholt pushed him to the cage. They separated briefly and Johnson landed some nice punches before they clinched again on the cage. They started landing big bombs in the clinch. Rosholt kept him on the cage, then Johnson got a body lock and got Rosholt off his feet and secured a takedown, but lost position in a scramble and ended up on bottom. Rosholt moves to side control and traps Johnson’s arm with his leg and tied for a paint brush submission on the other arm, but let it go.

Johnson came out in the third with a big punch early, but Rosholt got him on the cage. From there Rosholt just stayed on him, clinching him on the cage. Eventually the referee separated them. Johnson tried to land strikes but then clinched with Rosholt for some reason. Rosholt put him on the cage and looked to keep him there. They broke away but Johnson went in for a clinch. He was obviously down on the card and needed a finish, but kept looking to clinch. Finally they broke away and Johnson started landing massive punches. Rosholt was hurt badly but Johnson decided to take him down with seconds remaining. Confusing move.