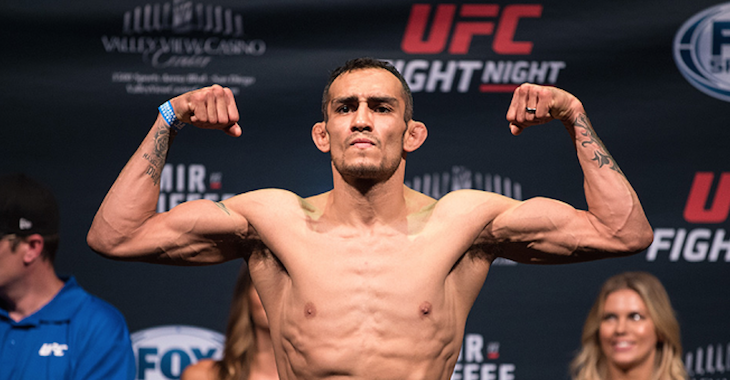 Both fighters showed some shifty movement early on. The feeling out process went on for a while. Ferguson thew a knee and Thomson caught it and went for a takedown, Ferguson realized it right away and flipped out of it. Ferguson landed a strong jab. Thomson landed a nice body punch-combo. Ferguson connected with another leg kick. Ferguson comes in with a jumping front kick to the body. Ferguson went for a flying knee, but Thomson countered with a takedown. Ferguson tried for a triangle but Thomson got free and worked from full guard for the remainder of the round.

In the second both fighters turned up the action. At one point they stood in from of each other and traded blows, then Ferguson did some kind of roll away from the exchange. Moments later Ferguson dropped Thomson. Ferguson rushed in for the finish. After some ground and pound the referee stand them up because Ferguson grabbed the fence to keep position. They start throwing bombs again. Thomson gets busted open. Thomson survived what looked like a locked in kimura. Somehow Thomson go to his feet and started swinging like a wild man before the round ended.

Ferguson tries another flying knee and Thomson grabs it, and went for a takedown, but fails. Thomson’s face was cut open bad and Ferguson caused another cut. Thomson went for takedown but Ferguson sprawled out. Ferguson was all smiles, walking Thomson down and looking for big shots. Thomson goes for a takedown and eats a knee. Thomson threw two spinning backlist, but missed. It was a great fight, but Ferguson clearly won.